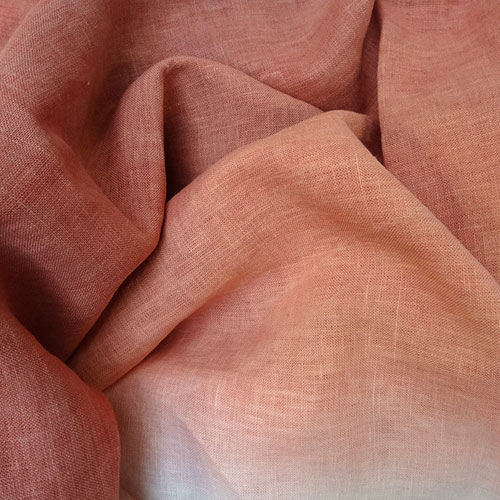 Oscha has hand dyed gradations on fine English and Irish linen, as well as on diamond weave cotton and linen/cotton blend. They are all lovingly hand dyed by Vicki Masters aka ‘Nana Oscha’.

“The linen for our art and gradation dyed slings is sourced from a traditional manufacturer in Ireland, where it is woven on a famous old loom. Irish linen is amongst the finest in the world, with its finely spun yarn, its softness and strength. We then hand dye the linen using high-quality dyes to ensure long- lasting vibrant colour.

Our Irish linen is sourced from a traditional manufacturer, and woven to the highest standards. Irish linen is considered to be the best available. It is strong, durable and finely spun. The result is a wrap that supports wonderfully, wears remarkably well, and once broken in, feels silky soft. It also looks great when worn.

Of all textile fibres, linen is one of the most ecologically sound. It needs less fertilizers and pesticides than most other crops – it is low input and therefore more environmentally friendly. It is also renewable with a short growing cycle and every part of the plant is used. Flax fibre is stronger than cotton fibre and its properties were recognised as early as Phoenician times when it was used to make linen sails.“

While Oscha may be most famous for its jacquard patterns, dyed gradations have always been a part of the in stock items on the website. They are very nice for warm (or even hot!) summers, keeping you cool like no other fabric will. Read more about the dye process on Oscha’s blog.

Cinnamon is a spice obtained from the inner bark of several trees from the genus Cinnamomum that is used in both sweet and savoury foods. The term “cinnamon” also refers to its mid-brown colour. While Cinnamomum verum is sometimes considered to be “true cinnamon”, most cinnamon in international commerce is derived from related species, which are also referred to as “cassia” to distinguish them from “true cinnamon”. Source: Wikipedia.