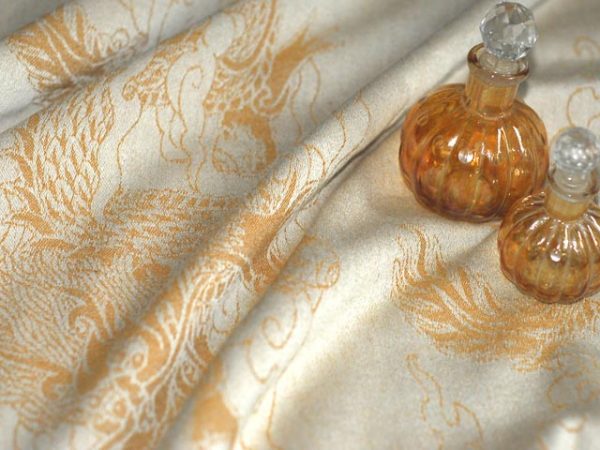 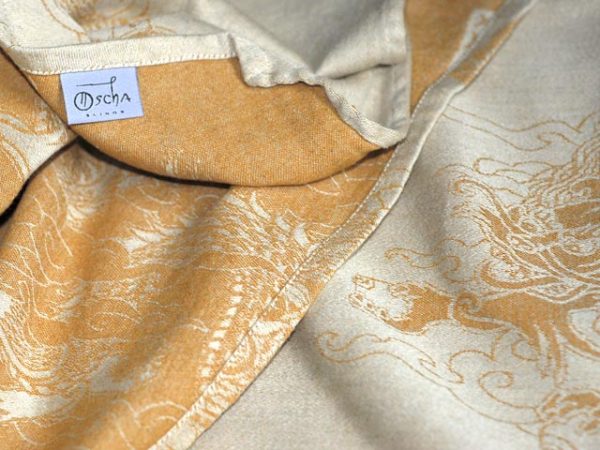 Sold as pleated RS with bronze and silver rings (confirmed), possibly gathered too. Part of the 2012 Machair collection.

“On North and Western seacoasts of Scotland and Ireland a special habitat has slowly been created by the windswept shell sand overlaying peat soil; the machair. From late May this fertile plain beside the sea bursts into bloom and a glorious meadow is created. Each machair boasts its own diverse species of wildflower in this unique habitat. This Collection celebrates the beautiful scene; the colours of the wildflowers, sky and sea, all found in one of the rarest habitats in Europe.”

“Presenting our new design, Shuǐ Lóng (Water Dragon) the divine mythical being possessing wisdom, protection and power. The dragon’s power is intimately linked with the natural world, the symbol and source of this being the pearls held in its claws. We have first woven it in the Caprica and Ember colourways as we wanted to take the opportunity with the red warp reweaving. However as we didn’t want to go into red overload, and also considering the season, we have only made a few in these colours. Shuǐ Lóng will be available in the next collection in some other colours and blends.”

The Tibetan Water Dragon – Shui Long was among the first patterns released by Oscha. The design has been especially popular with parents whose children were born in the Chinese Year of the Dragon (February 2012 – February 2013) but it has attracted other fans as well. It has a relatively small (but dedicated) fanbase.

Celandine (/ˈsɛləndaɪn/ or /-iːn/ is a common name for three species of flowers: