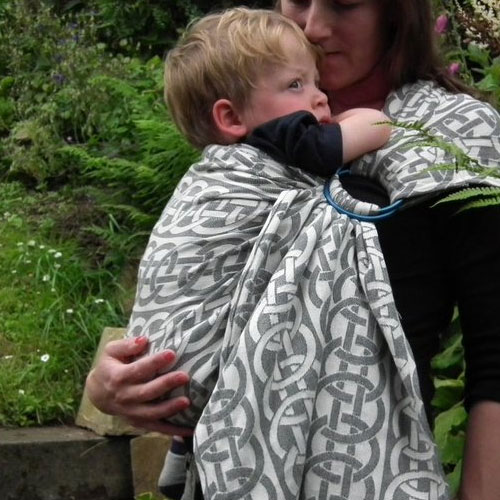 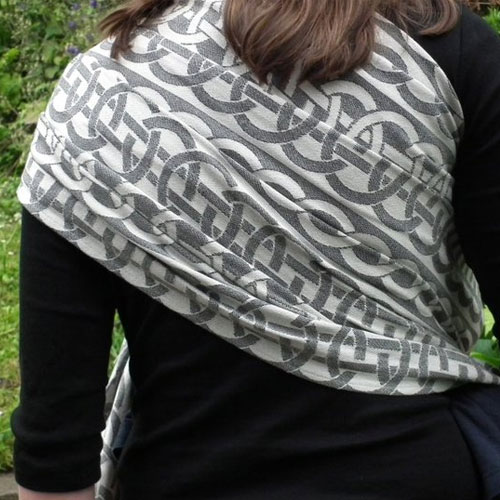 It seems at least a size 4 and a size 6 have been made of this prototype too, but at least the size 6 has sold off Facebook/the website.

Japanese Knot Ooki Zen prototype was sent traveling to various testers in order to get user feedback about the jacquard woven wraps. Together with the original  (thick) Nouveau Ecru prototype and, I think, an Irish linen grad dyed wrap (or maybe more than one) it must have been a great package.

In 2012 a ‘high numbers’ release was done of another batch of 100% cotton Japanese Knot Ooki Zen – most of the JKO Zen wraps you’ll see are from that batch, obviously. This is also called JKZO or JKOZ for short.

A truly peaceful, calm colourway in ecru and black, Zen is and has been a very popular colourway since the beginning. A ‘jeans wrap’ to be combined with almost anything you’re wearing, you can’t go wrong with an Oscha Zen wrap.

Zen originated in China and developed as a distinguished Chinese style of Buddhism. Zen emphasizes rigorous meditation-practice and insight into Buddha-nature. It also emphasizes the personal expression of this insight in daily life, especially for the benefit of others. As such, it de-emphasizes mere knowledge of sutras and doctrine and favors direct understanding through zazen and interaction with an accomplished teacher. Source: Wikipedia.