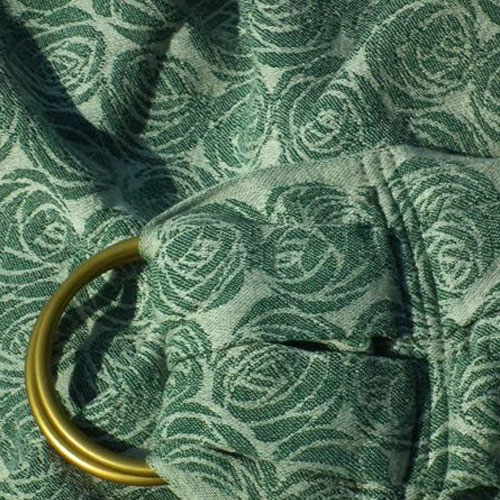 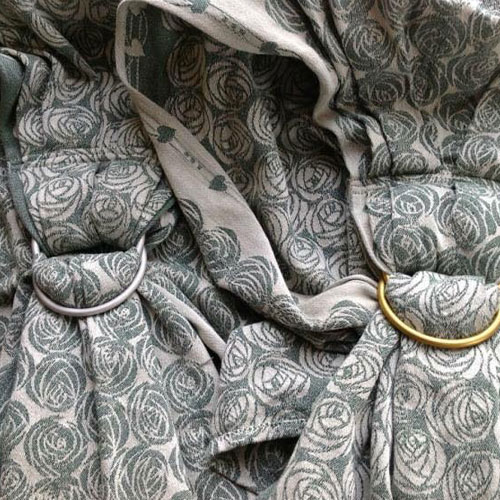 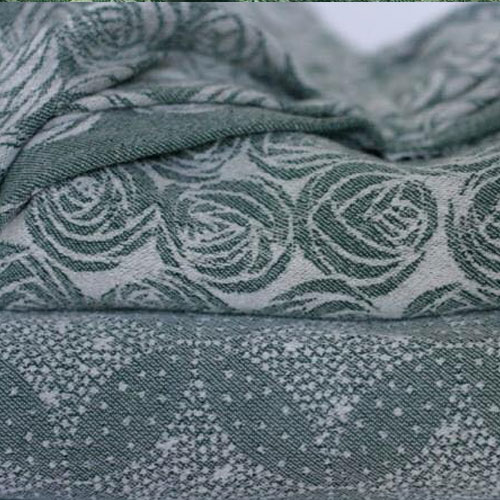 Roses Amity was never released, only two ring slings were made, both were auctioned for charity.

22 March 2012: “Only two of these ring slings in existence (well I think there’s another one somewhere, so it could just be one!). We are having a silent auction for this one and all profits will go to to Omaleshe Projects, which supports the teaching of dancing and drumming to orphans and vulnerable children in Namibia, many of whom have been affected by the HIV pandemic. Dance is an effective approach to dealing with grief and sorrow and a way of building confidence and self esteem for the children. If you’d like to place a bid please send an email stating the amount. We will inform the winner on 30th March 2012.”

Added in the comments: “Oh, this is 20% linen, the label wrongly says 50%. Omaleshe have a website: http://www.omaleshe.com/ and a just giving page http://www.justgiving.com/Vicki-Masters“

30 March 2012: “A massive thanks to Natalia and Olga who bid the two highest amounts (and having discovered the other one!) they will both receive these two of a kind Roses Amity ring slings. We’ve raised a total of £429 for the Omaleshe Trust. Many thanks for your generosity and also to everyone else who bid 🙂“

I’ve listed a ‘release date’ of 30 March 2012 because the winners were announced then. Usually, if they’re not sold on the site, I try to list the date the items were sent. This may have been a bit later than March 30th because on 5 April 2012 this was posted: “Yes both posted a few days ago 🙂“. But 30 March seemed a safe choice ;).

Please note: the stock photo used as the main pic here is not very true to colour, the other photo’s show the colour better. Additional photo’s copyright Ola Zelenaya, used with permission.

“Solo lines of colourways and patterns. These are not linked to a Collection, being exclusive, stand-alone editions.”
In this case, this being a prototype, it wasn’t planned as part of a Collection.

Introduced as part of the Winter Solstice Collection in December 2011, Roses has become one of Oscha’s most popular designs (even if it reminds some of cabbages). The first Roses release was Roses Noel. Roses were the second new pattern introduced with the Winter Solstice collection, after Strato and before Eden.

To those familiar with the work of Charles Rennie Mackintosh it’s easy to recognise the origins of the design. Charles Rennie Mackintosh (7 June 1868 – 10 December 1928) was a Scottish architect, designer, water colourist and artist. He was a designer in the Post-Impressionist movement and also the main representative of Art Nouveau in the United Kingdom. He had considerable influence on European design. He was born in Glasgow and died in London. Source: Wikipedia.

Amity means ‘friendship’. Derived from the Latin ‘amicitas’ and ‘amicus’ which means ‘friend’. The only other wrap named Amity was the first Starry Night, then called ‘green-ecru’, made in the very early days of Oscha Slings. Of the SN Amity, only 3 wraps and 1 ring sling were made.