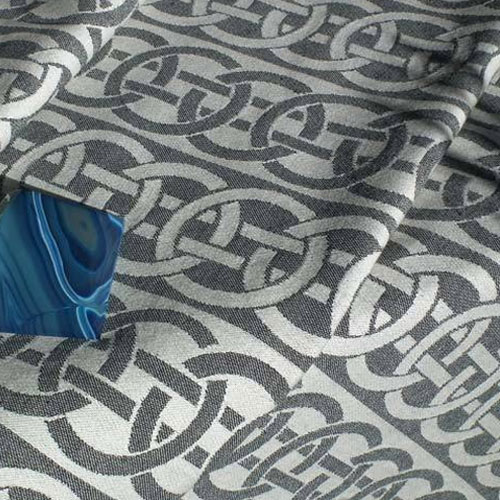 Japanese Knot Ooki Zen: “100% cotton ecru warp with black cotton weft. The overall effect is of a silver/grey. This sling has a lovely handle, is durable and comfortable.”

The first 100% cotton Japanese Knot Ooki Zen was a prototype. This listing is for the 100% cotton ‘high volume’ regular release, announced on Facebook and sold on the website on 15 May 2012:  “Alongside our next collection we have also been working on making 3 different ‘High Volume’ items. We’ve made a little more of these so they may be available to more customers. The first of these we will list later today or tomorrow.
Anyone feeling Zen?”

Weight (255gsm) has been copied from wovenwrapsdatabase; unverified by Oscha.

‘Ooki’ means ‘big’ in Japanese. The Japanese Knot design comes in two variations, Ookii and Chiisai (chiisai predictably meaning ‘small’).
Because the word ‘ooki’ is used as an adjective you will commonly see it written as ‘ookii’ or ‘ooki na’. Before 2016 Ookii was actually spelled Ooki in wrap names. As explained above, the correct way to write it is Ookii and this has been changed on Oscha’s website and FB page since 2016. Because many people know these wraps by their ‘old’ names, those that have been originally released with the name ‘Ooki’ remain uncorrected.

A truly peaceful, calm colourway in ecru and black, Zen is and has been a very popular colourway since the beginning. A ‘jeans wrap’ to be combined with almost anything you’re wearing, you can’t go wrong with an Oscha Zen wrap.
Zen originated in China and developed as a distinguished Chinese style of Buddhism. Zen emphasizes rigorous meditation-practice and insight into Buddha-nature. It also emphasizes the personal expression of this insight in daily life, especially for the benefit of others. As such, it de-emphasizes mere knowledge of sutras and doctrine and favors direct understanding through zazen and interaction with an accomplished teacher. Source: Wikipedia.