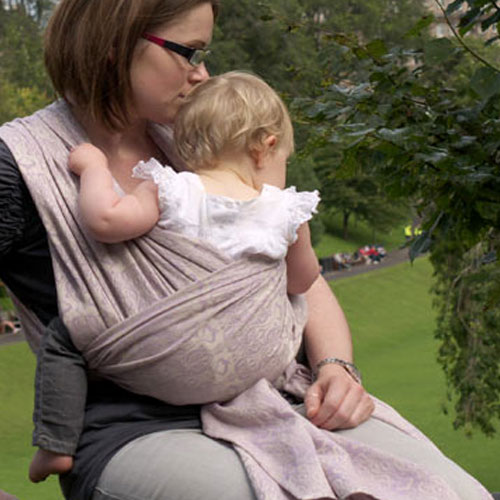 “Linen/cotton ecru warp with violet cotton weft. This elegant sling has a lovely handle and a gentle shimmer. 20%linen / 80% cotton.”

Weight (247gsm) copied from Slingofest and unverified by Oscha.

Islay (aɪljə/ eye-lə; Scottish Gaelic: Ìle, pronounced [ˈiːlə]) is the southernmost island of theInner Hebrides of Scotland. Known as “The Queen of the Hebrides”, it lies in Argyll just south west of Jura and around 40 kilometres (25 mi) north of the Irish coast. Islay is the fifth-largest Scottish island and the seventh-largest island surrounding Great Britain, with a total area of almost 620 square kilometres (239 sq mi).

Its landscapes have been celebrated through various art forms and there is a growing interest in renewable energy. Islay is home to many bird species such as the wintering populations of Greenland white-fronted and barnacle goose, and is a popular destination throughout the year for birdwatchers. The climate is mild and ameliorated by the Gulf Stream. The fractal coast has numerous bays and sea lochs, including Loch an t-Sailein, Aros Bay and Claggain Bay. Source: Wikipedia.