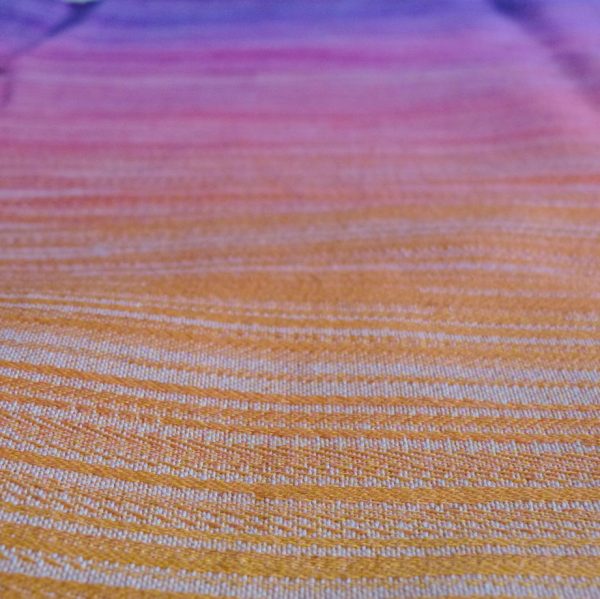 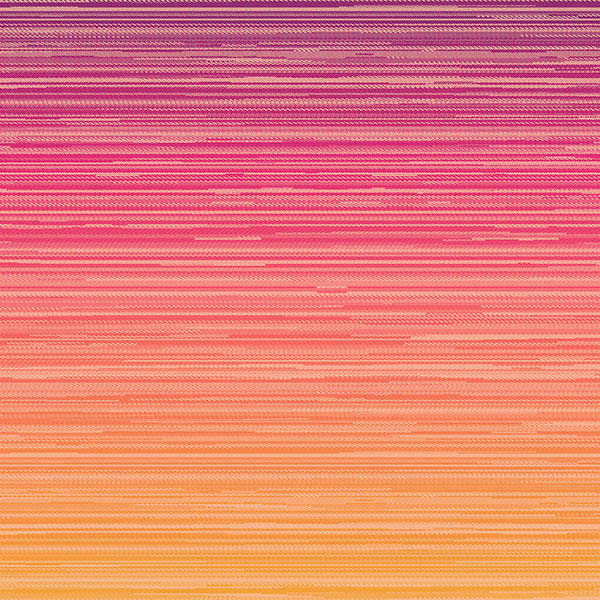 Matrix Sucre d’Orge: Part of the group exclusive preorder ‘Péché Mignon’ by the Facebook group ‘Fanas d’Oscha (et autres raretés)’, this is a lovely soft wrap with a cottolin warp and an organic combed cotton weft. This sweetie inspired pre-order warp fades beautifully between rich purples and pinks, through warm coral tones to a stunning burnt orange. An ecru weft contrasts beautifully with the dark purples and pinks while it lends a subtle touch to the orange tones on the other rail. Matrix Sucre d’Orge shares a weft with Starry Night Melba.

Five wraps make up this collection, named Péché Mignon (which can be translated as ‘guilty pleasure’ or more literally as ‘cute sin’). They have names based on sweets/desserts: (Alto) Bergamote, (Starry Night) Melba, (Kasumi) Mistral Gagnant, (Matrix) Sucre d’Orge and (Sekai) Berlingot. The entire warp was used for this group exclusive, there were no Oscha releases that shared the same warp (which would have made it a preorder instead of an exclusive). A few leftovers were posted on the website eventually.

First released as ‘Matrix Satori’, this wasn’t regarded as a very popular pattern, until the release of preorder wrap Matrix Adara (black weft on a blue-purple warp). It was suggested that the popularity of Matrix was then increased by the popularity of striped handwoven wraps. Whatever the reason, Matrix has since become a popular pattern, both as regular releases and part of preorders.

Inspired by the movie ‘The Matrix‘ where green binary code flows vertically across a black computer screen, the release of Matrix Satori was accompanied by a fun photoshoot that featured clothes and accessories (sunglasses!) reminiscent of the movie.

Sucre d’Orge (French for Barley sugar/barley sugar candy) is a traditional variety of boiled sweet (hard candy). They’re often yellow or orange in colour with sometimes an extract of barley added as flavouring. It is similar to hard caramel candy in its texture and taste. Barley sugar was often made into small spiral sticks, and the name is therefore sometimes used for the Solomonic columns in architecture. It’s also used for twisted legs and spindles in furniture, stair bannisters and other uses. The OED describes it as “a confection, usually in twisted sticks, made from sugar, formerly by boiling in a decoction of barley”. Source: Wikipedia