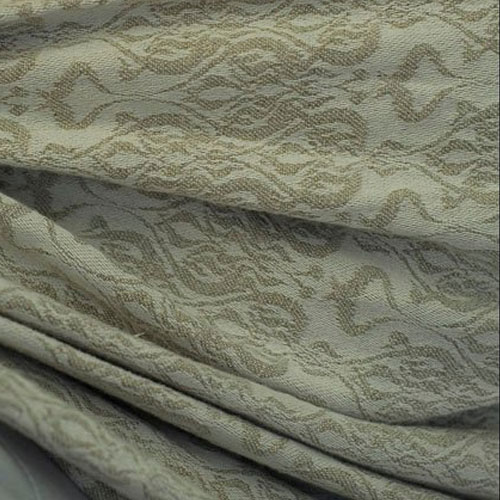 The Nouveau Ecru preorder was the very first release by Oscha – it was the first item offered. However, the first jacquard woven item sold on the website was Japanese Knot Ooki Zen with 20% linen.

12 June 2011: “The pre-order batch should be somewhat softer and more moldable than the tester batch. Just to let you all know!”
14 June 2011: “Oh, I received one of the 50% testers back (thank you!) and used it today at nap time, maybe I’m biased but it was amazingly comfy, very cushioned on my shoulders”

An update followed on 9 July 2011: “Update on the Nouveau Pre-order: It has been woven and will be getting made up into your wraps next week. I hope to have them ready to send by the end of the week/beginning of the following week. I shall get in touch with you all and sort out invoices after I’ve made sure that everything is ship shape!”
Invoices were sent on 20 July 2011 with the promise that if they were paid promptly then they’d also be sent out this day: “Everyone who ordered a 50% linen ecru Nouveau should now have received an invoice… except for you Kira, and I’m just about to message you :)”

A user estimation was made of 333-342 gsm. This is not an official Oscha measured weight. The picture used is from the original prototype/tester.

This was only offered/available as a preorder, though leftovers may have been sold on the website. This would only have become reality with enough interest, as there is usually a minimum amount (of metres in fabric) needed to justify the cost of producing the wraps. A deposit would be due on ordering and the rest to be invoiced before shipping. This later changed to having to pay the whole amount on ordering.

No poetic names yet, just a simple colour description of the warp and weft colours used for this wrap.

Ecru describes the shade greyish-pale yellow or a light greyish-yellowish brown. It is often used to describe such fabrics as silk and linen in their unbleached state. Ecru comes from the French word écru, which means literally ‘raw’ or ‘unbleached’. Source: Wikipedia.