by Pam in Interviews 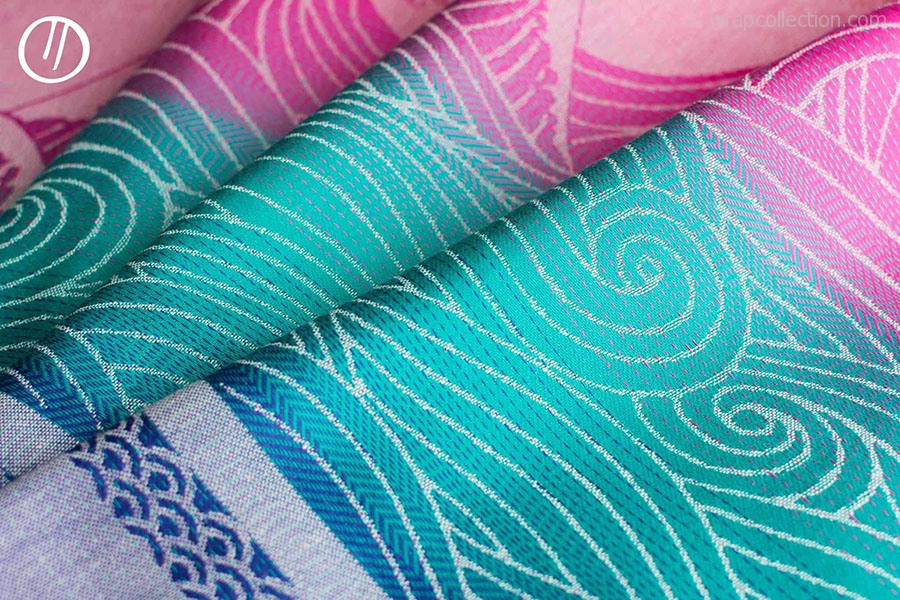 Co-owner of the Оscha slings Zoe Masters responds to our questions for Wrap collection.

The Oceania collection amazed everyone! How did you get the idea to make grades on patterns? Was it technically hard to produce? How do you see this idea evolving in the future?

Its something we’ve wanted to do for a while. We made an attempt with the ‘Fade’ wraps, but obviously that involved using the weft to make the grad and so it didn’t allow us to put patterns through it and we couldn’t attain the same depth of colour. It is quite costly to do and requires a certain warp length as there’s so many colours to dye, so it was very nerve wracking waiting to see how they would turn out. I suppose seeing the wonderful things that hand-weavers have been coming up with; the way they play with colour is beautiful, but in many cases its not really something you can do on a jacquard loom, also a hand-weaver can make small test samples, which we are unable to do for dyed warps, which have to be made in bulk. However, we thought that we have a small advantage in that we can be more creative with patterns over the gradated warp colours. Also, because we have such a high thread count, the colours can be really vibrant and the grad very soft. We can see areas for improvement and we have lots of ideas about how to take it forward. You’ll see some of these ideas come to life around October this year.

Do you ever plan to use mulberry silk in your wraps?

Not at the moment and its not been something that customers have asked us for. We’d be interested to hear feedback on this though, if there is demand for it. Although I’m not terribly keen as its nice to stick to the more ethically produced silks. 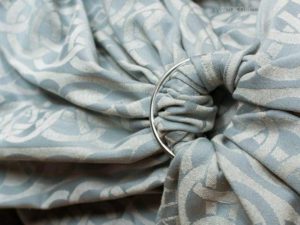 Will there be a Lord of the rings collection?

Definitely, I think a lot of our patterns would really suit this and I’d love to come up with patterns specifically for it. When we did our competition to come up with a Collection theme LOTRs was the most popular entry (and then Game of Thrones, although Dr Who was up there too, but I think we’ll leave that to someone else!). I have a design that I’ve been holding on to almost since the beginning of Oscha, and would love to bring this out as part of a LOTRs Collection, perhaps early next year we will do this. 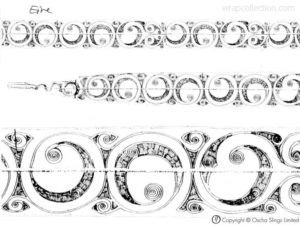 Drawings for Eire design by Zoe.

We would love to know more about such patterns as Eire and Aria — who they were designed by, what the inspiration for them was, where the names come from?

I designed Eire, the outline was largely taken from a bronze age scabbard found in Ireland, which I adapted and added new pattern in-fills to. Babywearing Ireland wanted an exclusive but weren’t able to design their own wrap so I offered to do the design and they could have the first colourway as their Exclusive. This is one of my favourite patterns, I think it is timeless, elegant and it looks quite Elven to me! 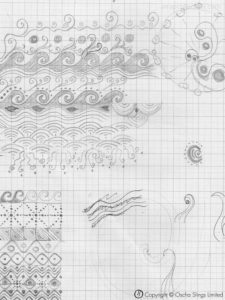 Mike’s doodles – inspiration for the Aria and Lyra patterns

Aria was developed from a design Mike and I did very early on which we shelved for ages. We came back to it, and I created Lyra whilst Mike created Aria, I think he did better! He named Aria because he thought it looked lyrical. I guess the original design came from my general love of spirals, waves and dots, its a bit of a doodle-pattern really and a bit different from some of our ‘normal’ stuff, but its kind of fun and bit more light-hearted, which is nice for a change.

Will there be any more bi-colored wraps? Why were they not as popular, do you think?

I don’t know if we’ll make more. I am totally bemused about why they didn’t go down so well. Its funny at the moment as so many customers are complaining ‘why didn’t you make more Hawai’i wraps? How could you not know they would be popular?’ and I think of Teo Ghanima… for me this is one of the nicest things I’ve ever come up with! I thought it looked on-trend, edgy, yet at the same time traditional and beautiful — the detail of the borders, with the bold central, geometric shapes and the funky colours. I really thought people would enjoy that stuff, same with the JK Ooki’s (Ghanima and Gauis).So its all guess work and experimentation really, we can never be 100% sure if customers will like our creations, but we always try our best. 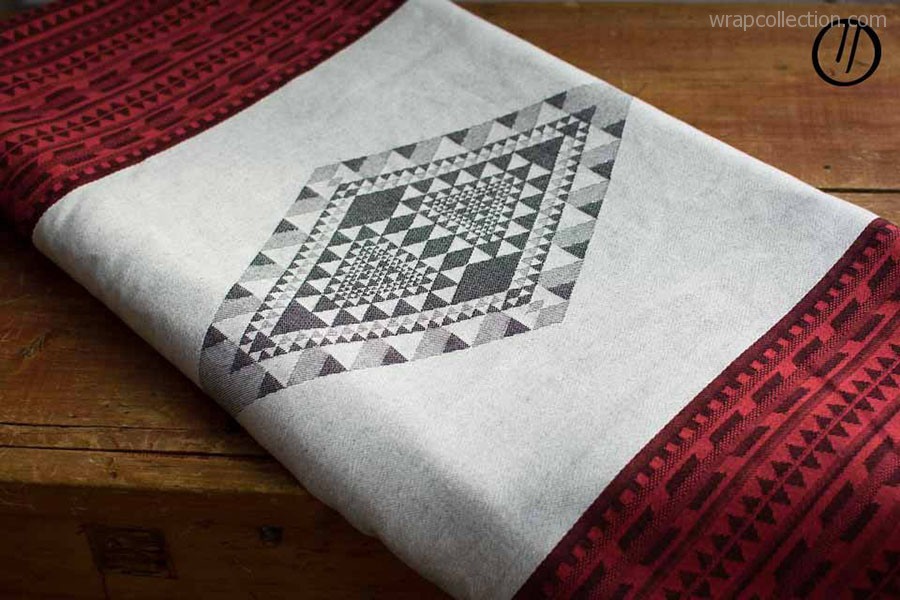 Are you planning on releasing any more hand-wovens? Would you use the same weaver or someone else?

We’ve been working with another hand-weaver for some time now to develop some traditional, earthy fabric and intricate patterns, which we hope are quite different than other things that are out there. We hope to send out testers for that soon. We will continue to work with Cally Booker and she’ll do us one warp (making about 2-3 wraps) every season with new patterns/colours. She’s lovely to work with and very experienced. Hand-weaving is likely to be a very small side-line for us though. Mike & I enjoy designing and experimenting with pattern and colour too much ourselves!

Things have changed a lot since the last interview! I really like that people can come to our store and have a good range to choose from now, and that has happened organically. We will choose the odd item to re-run, for instance we feel that red Roses (Eros and Aphrodite) seem like good items to have in stock and have re-woven them. We try to think about what someone new to babywearing might like the look of, as opposed to a collector, and keep that in mind when thinking about ‘regular’ stock. So, for instance, Ladybirds is not a ‘collectors’ cup of tea (most likely) but to a new parent its a really sweet pattern that they want to have for their child. It would be interesting to think about a few items that will always appeal to new parents and that the community would also like to see available and consider those for in-stock items. At the end of the day I prefer us having stock available as well as having the odd sell-out line as I feel it makes us a more viable business in the long-term and more able to promote babywearing. 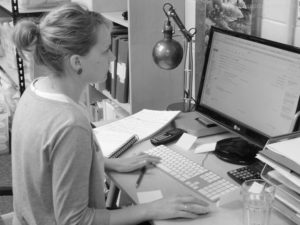 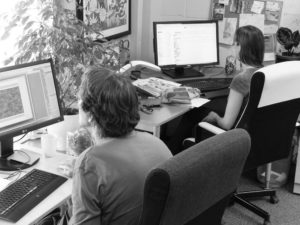 Which wraps did the creators of Oscha keep for themselves (maybe for sentimental reasons)? Or do you have one of every wrap created on your shelf?

We didn’t keep hold of one of everything from the early days but do that now. I still have a wee stash. I liked the wool wraps best (as my boys have just turned 5!) — Strato Nocturnus, Roses Noel, Nouveau cashmere prototype etc and for summer I used Surya Tiree a lot. One of my sons only wanted to be wrapped in Shui Long Emperor though and the other in SN ‘Dragonfruit’! These days, as we don’t really wrap anymore, I like to take the sling fabric to use as shawls or make into things for our home. I was at a wedding the other day and used Sekai Hilo as a shawl, we have Eire Charn curtains in our sitting room and JK Jinn in the bedroom. The kids have SN and Raja curtains!

Will we see more of the Raja pattern in contrast colors? Do you plan to make the pattern smaller?

Do a lot of people want it small again, like with Paravel? Maybe we need to ask on FB what customers would like to see with this pattern! We don’t have it planned for anything at the moment.

Will there be any special offers with reduced prices on any wraps? 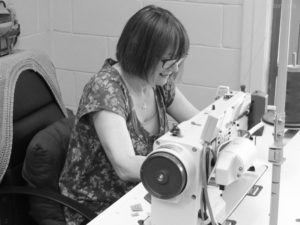 Because everything is woven in the UK from the best quality yarns and all our production is done here too, with everyone being paid a good living wage, our prices are what they are for a reason. We prefer that customers accept them rather than wait for a sale to purchase from us, so we don’t plan to have sales too often. Having said that, there will be more at some point!

Do you communicate a lot with your fans? Do you have any special memories of such interactions?

Well, I definitely miss all our Russian fans. I always remember when we first showed the Roses pattern (I believe it was Roses Noel) it was very much picked up on by babywearers from Russia first (good taste obviously ;)).All of a sudden I was having loads of conversations with Russian mamas, many of who went on to become regular and valued customers who I chatted with a lot for the next year or so. So I have very fond memories of many of them and it was always lovely to see the pictures of the wraps being used and little ones growing up.

We have some lovely summer colours to come, an amazing charity wrap designed by a Filipino tattoo artist (to raise money for those who lost their homes in the Tsunami) and some gorgeous new fabric blends. Just around the corner is another beautiful design from Mike, which takes inspiration from my Okinami pattern, so we’re hoping this will also capture our customer’s imaginations 🙂